Supported by G C W Warr, Professor of Classics at King’s College London, and the Principal Alfred Barry, from 1878 lectures for ladies were held in the old town hall in Kensington. 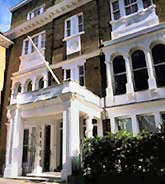 Attendance outgrew the lecture rooms, which in 1879 were moved to a house in Observatory Avenue, Kensington. From 1881 moves were made to found a ladies’ department of King’s College based on this initiative, with the necessary statutory powers obtained by an Act of Parliament which received the royal assent in 1882. The Ladies’ Department was inaugurated in 1885 at no 13 Kensington Square. It was to be administered, under the Council of King’s College, by an executive committee. The principal of King’s College was head of the department, with a lady superintendent (from 1891 known as the vice principal) as his deputy in Kensington Square.

The department’s function at this period was not to prepare its students for definite professional careers, but to give them a taste of a liberal education. Under Lilian Faithfull as vice-principal (1894-1907) the department developed the character of a university college. In 1898 the application for the admission of women to the King’s College associateship was granted by the Council. From 1902 the department was known as the Women’s Department, and students took examinations for London University degrees and Oxford or Cambridge diplomas.

In 1928 the department became completely independent as King’s College of Household and Social Science and the title King’s College for Women was extinguished. The buildings were completed in 1930.  The College had a pioneering role in establishing nutritional science as a subject of academic scholarship and John Yudkin was a Professor from 1945 to 1971. A Royal Charter was granted in 1953, the name changed to Queen Elizabeth College, men were admitted, and the existing degree was replaced with BSc (Nutrition) and BSc (Household Science). Recognition as a School of the University of London in the Faculty of Science was granted in 1956. The BSc (General) began in 1957.

Following financial difficulties the amalgamation of the College with King’s College London and Chelsea College was completed in 1985. 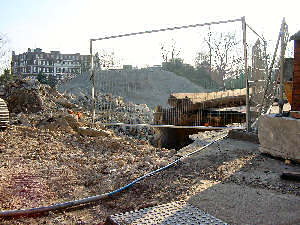 The picture shows the remains of the Atkins building in 2003, with QEC in the background.