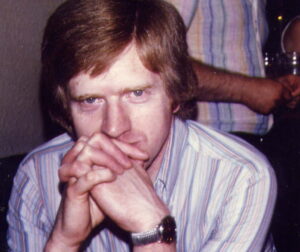 The news of Chris’ death brought both sadness and relief at his final escape from the illness that has dogged him since his heart attack just over eight years ago.

I have many memories of Chris going back to our first meeting at the ‘Welcome Party’ when I started as an undergraduate in Microbiology at QEC in 1970. Chris had joined QEC as an Assistant Lecturer in the Biochemistry Dept in 1969 fresh from doing his PhD at UCL (those were the days!) and in 1970 transferred to a Lectureship in the Microbiology Dept, so it was a welcome party for him too in a way.

As a result of his contributions to Microbiology research and teaching, as well as to college management over the years at QEC and King’s, Chris was promoted to Senior Lecturer (1984) and then Professor (1996).

Chris taught molecular biology in particular, but also microbial metabolism and genetics, plant biotechnology, algal and cyanobacterial systematics (which had been among his first research interests) and developmental biology. One of my earliest recollections of his lectures, is of him sitting on the front bench of the Lower Ground Floor Lecture theatre in the Atkins building. I think he was trying to get us enthused about slime moulds and their development but I could never see their attraction!

His many (ca 20) PhD students will be particularly sad at his passing. His first research student was a contemporary of mine – Lee Richards – who became a lecturer, first in the Isotope Unit at QEC, then in Microbiology as a result of the mergers and rationalisations in the mid 1980’s. He himself has only recently retired from King’s. Chris’ second research student was Joy Leonard who eventually married Robert Poole, a lecturer in Microbiology and ultimately Head of Department. Chris also co-supervised me for a year when my supervisor moved to Warwick and I needed in-house supervision in the days long before two supervisors became the norm. In many ways the Microbiology department had very much a family feel to it and while Chris was a bit of a latecomer, he was still among the ‘founding fathers’ of the Microbiology Dept at QEC which was itself one of the first non-Medical Microbiology departments in the country, and the first of its kind in London.

Chris made significant contributions to research either alone or in collaboration with people inside and outside of King’s. His first focus was on the green alga Chlorella. He subsequently collaborated (with John Stirling, Jeremy Mason, Peter Bennetto) on microbial fuel cells which not only produced many research papers, but also led to commercial development and some royalties from Cambridge BioSciences plc to college. In the final 15 years of his research career he collaborated with (the late) David Wood at HRI and their combined efforts on the molecular biology of Agaricus bisporus (cultivated mushroom) was held in high esteem internationally.

In the College community Chris will probably be best remembered for his extensive and outstanding contribution to college management by his services to at least 20 Committees and Boards during his 31 years at QEC/King’s. He was a member of the QEC Merger Working Party and ultimately the joint Working Party for the King’s, Chelsea, QEC merger planning (1983-85). He played a similar role from 1994 on the Academic Planning Team for the King’s/UMDS merger. He was Deputy Head of the Division of Biosphere Sciences from 1988-91 and retained a high profile in Divisional management in its successor, Life Sciences. He was responsible for planning and management of college space and its usage (on various Estates committees) for at least 15 years. I recall for several years his constant referral to ‘The Cornwall House Project’ and his work for the project planning team which usually meant that he would have innumerable sheets of plans or measurements, catalogues, and company rep visitors. He also made some trips overseas to see labs already designed/furnished by aforementioned companies. I recall his stories of a trip to California to see new labs, but his overwhelming memory was of his hotel room which was located away from the core of the hotel and was accessed by a high walkway – which did no good for his vertigo! FWB as it is today is largely based on the scheme he generated for disposition of the office, social, teaching, library and research space.

It can rightly be said that in his 31 years in the college (and QEC) he contributed and achieved far above the norm.