David L Yudlevich, former Head of the Department of Physiology at QEC, passed away in London in May 2006 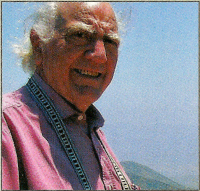 He was born in Santiago, Chile in 1930 and received his MD in 1957 from the Universidad de Chile. In 1974 he was appointed Professor and Head of the Department of Physiology at Queen Elizabeth College. As Head of Department(1974-85)David always encouraged research-led teaching initiatives and under his leadership the department prospered (Queen Elizabeth and Chelsea Colleges merged with King’s in 1985). David was passionate about research and during his early career made seminal contributions to the field of capillary permeability, studying microvascular permeability in the isolated perfused gastric mucosa, heart and brain using the multiple indicator dilution technique. He extended this technique to study carrier-mediated transport of nutrients across the maternal and foetal interfaces of the isolated perfused guinea pig placenta, blood-brain barrier, salivary epithelium and lastly umbilical vein enclothelial cells from normotensive and gestational diabetic pregnancies.

David was committed to strengthening research links between Chile and Britain, culminating in his appointment as Honorary President of the Joint Meeting of The Physiological Society and Sociedad Chilena de Ciencas Fisiologicas in Pucon, Chile. In retirement, David’s contribution was further acknowledged by awards including an Emeritus Professorship of Physiology at King’s. David was a unique, lively and driven individual, always seeking to explore new horizons. Perhaps David standing in the mountains in Chile, with his traveling bag, highlights his wanderlust and appreciation of science, nature, life and, above all, his family.